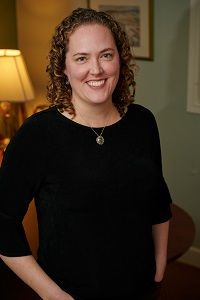 Nora was working as a stage manager in Seattle when The Co-op Funeral Home of People's Memorial was forming in 2007. She jumped at the chance to be involved with such a wonderful organization. She began as an intern and worked her way up to being named the Managing Funeral Director in 2013, and now Executive Director of People's Memorial Association and The Co-op Funeral Home.

With a background in home funerals, Jewish traditions, and a passion for natural burial and modern funeral practices, Nora strives to help each family make their arrangements according to their needs and wishes. She makes sure meeting with her isn’t the hard part of dealing with the loss of a loved one.

Nora lives in West Seattle with her husband Nick (yes, they are Nick and Nora) and 9-year-old, Sam.